The excavation started in February and lasted more than two months with financial support coming from both the EEF and the Hellenic Society. Archaeological expertise came from both Benson and Bevan who were from the British School of Athens.

In order to explore the plan of the ancient city, which lies underneath the modern one, Hogarth sank vertical shafts guided by Strabo's description of the ancient city. Hogarth was looking for specific buildings such as the royal palace, the Caesareum, the gymnaseum, the tomb of Alexander, and the Mouseion. Some finds, like ceramics, architectural fragments, and a mosaic, were recovered. The were also excavations at Kom el-Dikka, which were accomplished by tunneling through the mound.

Benson and Bevan concentrated on cemeteries: at Hadra near the railway station, east of the Canopic Gate, and at Sidi Gabr. At Hadra many of the tombs were water-logged and had been plundered. They did recover ceramics, lead coffins, a bronze chaplet and some other amulets. The tombs to the east of the Canopic Gate had also been plundered, but pottery and amphora were recovered. At Sibi Gabr, the excavation revealed the architecture of a shaft tomb. 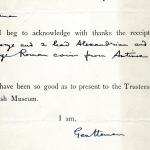