The London-based Egypt Exploration Fund (EEF) was founded in 1882 by Amelia Edwards and Reginald Stuart Poole in order to explore, survey, and excavate in Egypt. Sharing the results of their work was also a core value. The latter was to be achieved initially through publications and lectures alone, rather than the dispersal of finds, as the laws of Egypt prohibited the export of antiquities from the country. From 1883, however, a system of ‘partage’ was negotiated with the head of the Egyptian Antiquities Service, Gaston Maspero, whereby a portion of discoveries made by licenced excavations were permitted to be exported by the foreign mission that directed the fieldwork following Cairo officials’ first selection. Through this mechanism the EEF was able to legally bring back to Britain many thousands of artefacts. Following an annual exhibition in London of the season’s work, the Fund sought to distribute these finds to public institutions and this became one of the ‘objects’ of the EEF:

“(c.) To make, maintain and exhibit illustrative collections of antiquities and other things relative to, or connected with, any of the objects of the Society, or to present any such antiquities or things to any public body, university, school, library, or other similar institutions.” (EES Memorandum of Association, 1888).

Many museums, universities and libraries sponsored the work of the EEF through ‘subscriptions’, as did numerous individuals. However, private individuals did not normally receive finds in return, but rather could nominate local public institutions to be the recipients of artefacts. The demographic spread of sponsors informed dispersal decisions, as did the amount of money public organisations put forward. By these means, more than 75 institutions in the UK, at least 35 destinations in the US and a further 35 organizations worldwide received crates of artefacts by 1915. These were usually dispersed promptly at the end of the season, but any residual things could be kept in storage for several years before being dispatched if new donor institutions came forward.

Only in very exceptional circumstances did individuals personally receive single token objects. In 1899, for instance, the discovery of hundreds of small funerary figurines called ‘shabtis’ – an extremely common artefact type – prompted the Fund to present one to every EEF subscriber. However, the over-riding principle behind EEF distributions was always that all material should be kept in the public realm. Excavations were never intended to be for private gain and they were certainly never for financial profit. The Graeco-Roman Branch of the EEF was founded in the wake of expeditions to the Fayum in 1893–1897, which led to the discovery of thousands of fragments of papyri. The distribution of papyri were organized in a different manner from other types of objects recovered during these excavations and, consequently, the papyri are not being addressed as part of the current ‘Artefacts of Excavation’ project. 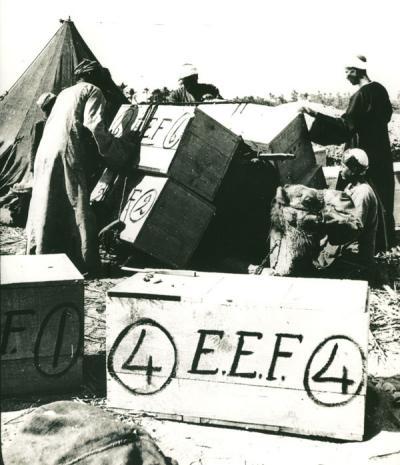