The Egyptian Research Account (ERA) was essentially a bank account, rather than an institution. In 1905 the ERA was used to support Petrie’s initiative: the British School of Archaeology in Egypt (BSAE) and the first publications of the BSAE were printed under the joint ageis of the ERA and BSAE.

The objects of the BSAE were:

Its finds distribution procedures followed the same principles as the Egyptian Exploration Fund (EEF): “Antiquities not claimed by the Egyptian Government shall be divided entirely among public museums, excepting large numbers of similar objects which may be given to the subscribers. In distribution to Museums the total of contributions from any place or district shall be taken into account, after deducting from those amounts one guinea for each volume of publication given on account of those contributions” (BSAE Regulations, 1905).

In 1925 Flinders Petrie abandoned working in Egypt, believing that new Egyptian legislation curtailing the share of finds was too constrictive and he moved the focus of the BSAE to ‘Egypt over the border’ in Palestine, where a similar distribution of finds was administered. Petrie passed away in Jerusalem in 1942, but his widow, Hilda, attempted to maintain the organization and continued to distribute residual objects from earlier BSAE excavations. The post-war world was a very different place though and the BSAE formally came to an end in 1954. Its assets were vested in University College of London (UCL).

The BSAE archive is looked after by the Petrie Museum of Egyptian Archaeology, UCL. 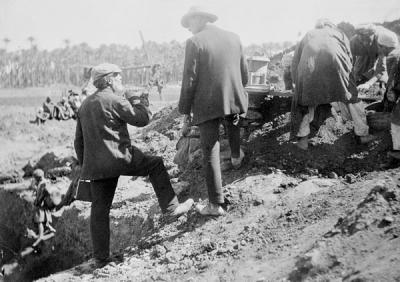 Flinders Petrie on site of BSAE excavations at Memphis around 1909. Petrie Museum of Egyptian Archaeology, UCL.